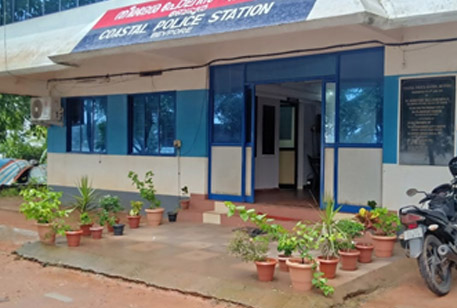 Coastal Police Stations are formed to attain the objectives of Coastal Security Scheme formulated by MHA, Govt. Of India. The objective of the scheme is to strengthen the infrastructure for Patrolling and Surveillance of Coastal area, particularly shallow waters close to the coast, which was left unpoliced. The Coastal Police is a part of the State Police and exercises their powers and duties in their policing jurisdiction effectively in the territorial waters. Beypore coastal Police Station was built under the First Phase of Coastal Security Scheme. It started functioning on 27th June 2010 (Govt. Notification-GO (Rt) 513/2011 Home Dated 16/02/2011) in a newly constructed 3 storied building, with a watch tower on the top, at the banks of the river Chaliyar, near Beypore Estuary. The station was built in a land of area 20 cents in survey no.4/2 of Kadalundy Village in Kozhikode District.