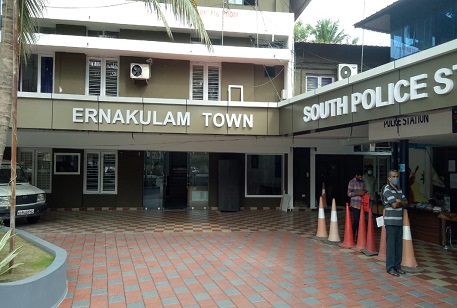 The police station came into existance on 17.10.1975 inagurated by the Minister of Home Sri.K.Karunakaran. Ernakulma Town South police station is situated in the side of MG Road, consisiting of area 290.49 Sq.Mtr and the jurisdictional area is streatched into 9.41 Sq. Kms towards south of Sahodaram Ayyappan Road stating from Pompey Matha Curch near Fine Arts Hall (sharing the border with Central Police Station) and extends to Elamkulam Bridge sharing the border with Maradu Police Station. The south end portion is the Venduruthy Bridge alligning border with the Harbour Police Station. Cochin Shipyard is the most important area in view of security measure, other than this Neetta Jelatin Corporate Office, IOC Office, Reagional Passport Office, Sales Tax Office, Water Authority Pumping Station are other important instutuions fuctioning with the jurisdiction of ET South Police Station. Sacret Hearts College is sututated within the police station jurisdiction and other than that SC HSS, St.Thomas School, CCPLM Anglo Indian School, Govt School at Panampilly Nagar, Bhavans School and Govt Fisheries VHSC is also functioning with the station limits. The famous Medical Trust Hospital is also functioning with the station limit ans other than this hospital Vasan Eye Care, Lotus Eye Hospital Giridhar Eye Hospital and Chaithanya Eye Hospital are functioning. Most famus St.Joseph Curch which is the pilgrim centre of St.Jude is functioning wihtin the limit of Et South Ps, this is the first church in kerala to offer 'Novena' in malayalam,. During Thursdays thousands of folks come to the church offering prayers and gratitude to the shrine. The Ravipuram Temple in which Lod Krishna is the diety is a famous temple in the model of Guruvayoor Temple. A mosque is also situated within the pocie station limit. The KURTC bus stand is near to the police staion at Thevara. The famous Folklore Museum is also situated in the limit of ET South PS.