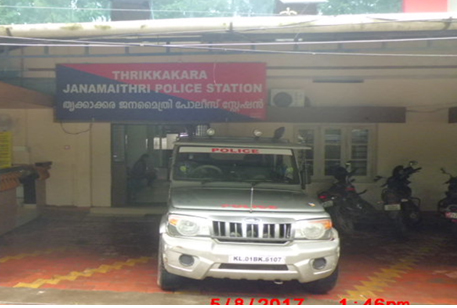 Thrikkakara Police Station was opened on 25-10-1982 as per GO(Rt )2278/82 dtd 09-09-1982. As per the order of the Commissioner of Police, Kochi City Order No G2A 46931/1999 /EC Dated 29-06-2000 this Police Station was reframed and opened Reception Counter on 01-08-2000 at 9.00am. The Police Station is situated approximately 100 meters away from Kakkanadu Civil Station near Seaport Air port Road. Janamaithry project and Students Police Cadets were also functioning in Thrikkakara PS. The Building is located in Sy No 588/01 of Kakkanadu Village in Kanayanoor Taluk in a Place Known as Mavelipuram Colony , this Police station was functioning around 2 acres of Land and there are 48 Nos Family Quarters are also under this station. The station coming under Thrikkakara Sub division and the Circle office is Kalamassery